The new app "SCHOEPS Image Assistant v3" is available as a browser version and in the Apple app store.

The Image Assistant was originally created as a JAVA Applet v2.1 by Helmut Wittek in the year 2000. It is a tool to calculate the localisation curve of arbitrary 2- and 3-ch stereophonic microphone arrays. With the new app, even more helpful features are available:

For the urgent user:

Press the Menu button in the top left corner: 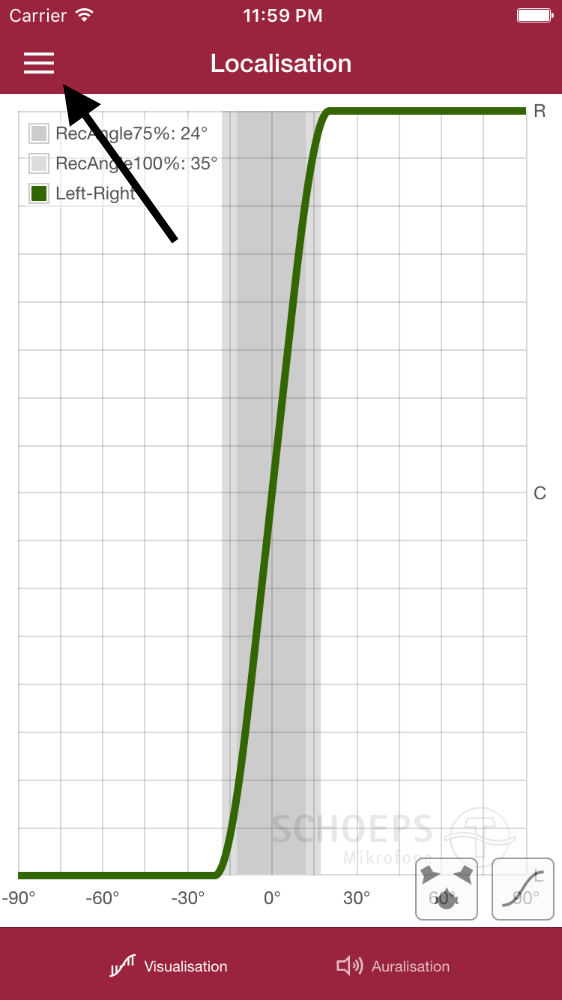 Choose a Preset in the top dropdown menu: 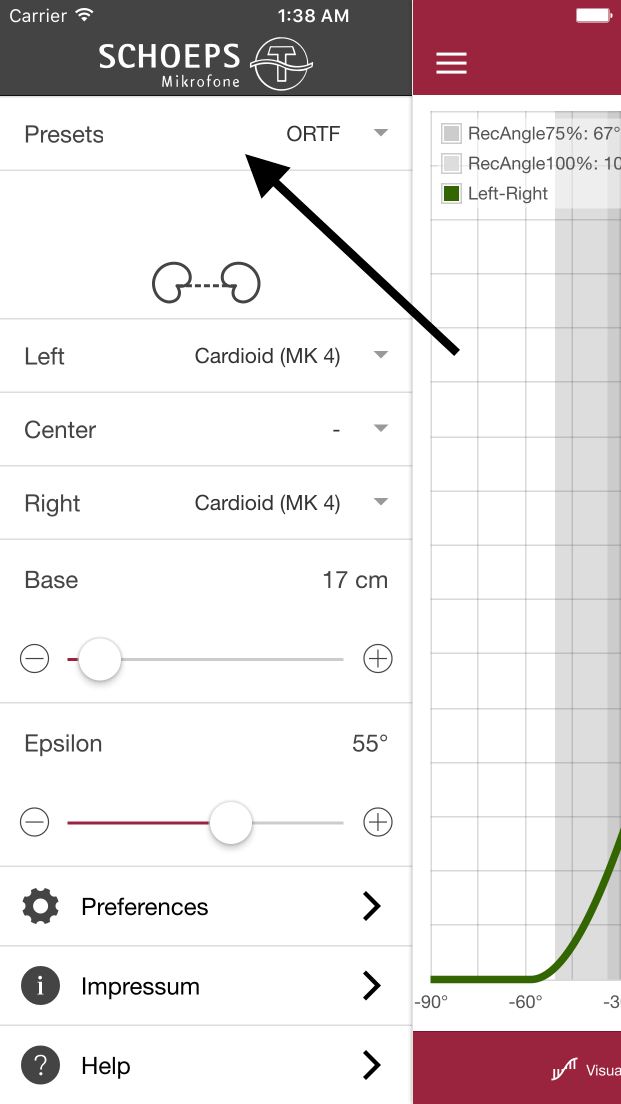 Toggle between different graphs by pressing the buttons in the bottom right corner of the figure:

Localisation shows the directional function of the setup

Coherency shows the coherence between the channels in the diffuse field

Power Sum shows the function of the overall sound energy

For the thorough user:

- Graphical Preview of the setup

By choosing a setup of the dropdown list, the values of the corresponding parameters are updated automatically and the graphs are recalculated.

Graphical Preview of the setup

A to scale preview of the stereophonic microphone array setup is shown in real time during a change of the parameters.

The directional pattern of the microphones. Each microphone is routed discretely to one single loudspeaker channel from L/C/R. The Center channel can be skipped for a 2ch L/R stereo setup.

The directional patterns are all omni and first order gradients which can be described by the function s = a + (1-a) *cos(φ).

Where φ describes the input source angle, a the omni portion and s the output level of the microphone.

You can choose a directional pattern from these options:

Often people ask whether it plays a role that these patterns are calculated theoretically and not taking into account the frequency dependency of real capsules. In fact, there is a discrepancy, but this depends on the brand and type of the microphone. In principle, small-membrane microphones are more frequency-independent than large-membrane microphones. Moreover, all SCHOEPS capsules are optimized particularly for their frequency independency, so that virtually no difference exists between the theoretical values and the practical measurements (of each produced microphone capsule!) within nearly the whole frequency range. An exception is the omni which intentionally increases its directivity at higher frequencies due to the pressure built-up effect.

Here are the measured polar patterns of the SCHOEPS MK capsules corresponding to the above list: 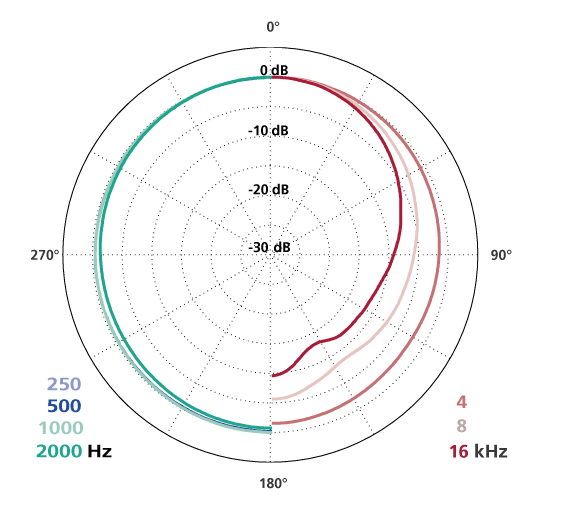 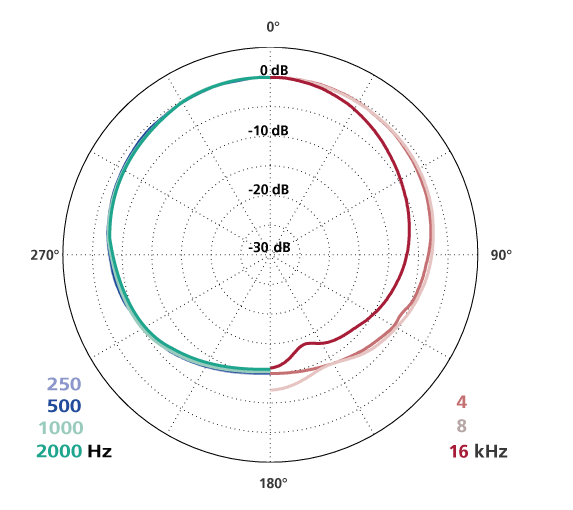 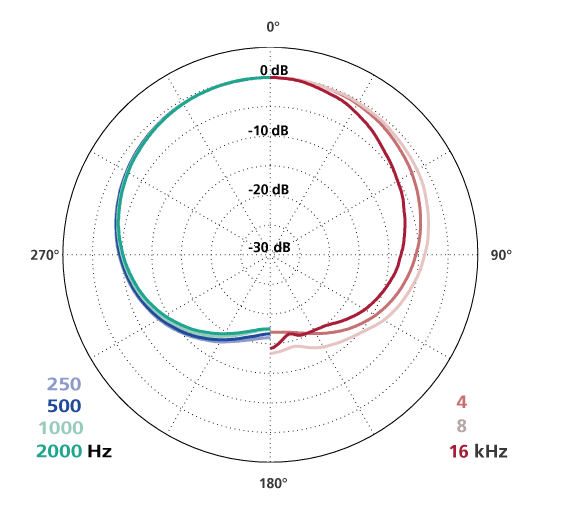 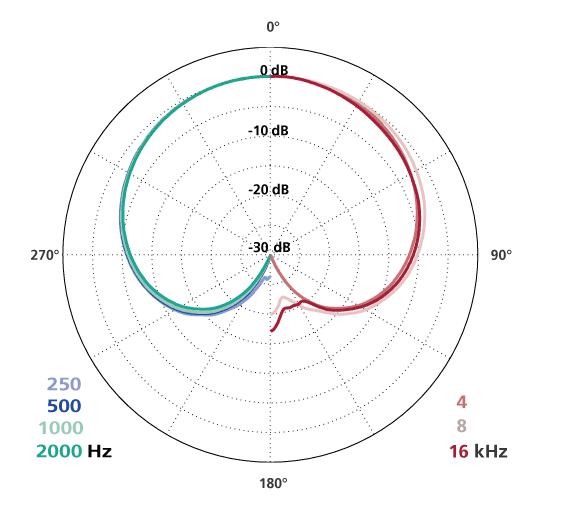 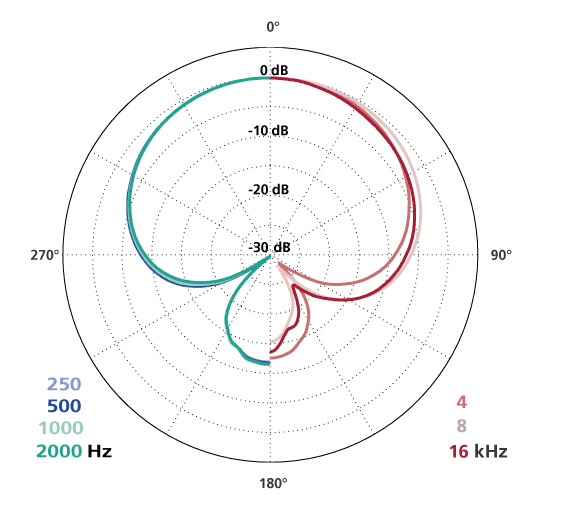 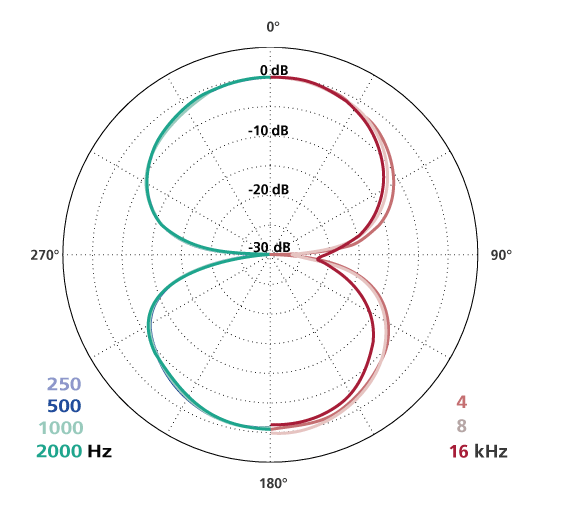 The distance between the microphones L and R.

Center Offset (only visible when a Center microphone is chosen)

The distance between the baseline which connects the two microphones L and R and the microphone C.

The Center microphone is always oriented at 0° and cannot be rotated.

For the off-axis mode, the Speaker Setup can be changed to be a cinema-like “one-line” setup with the Center located in the middle of the connection line between loudspeakers L and R. 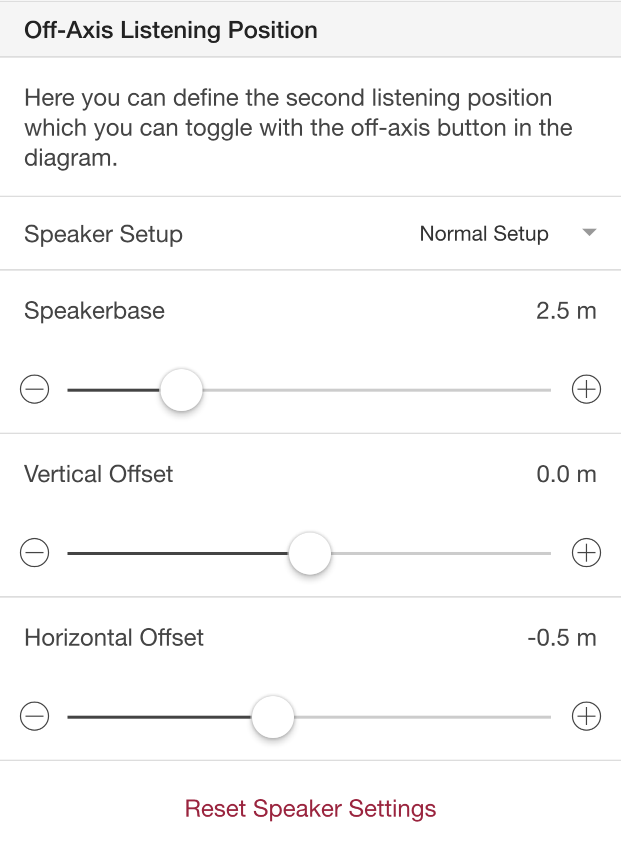 By clicking Reset Miscellaneous the default distance (5m) is reset. 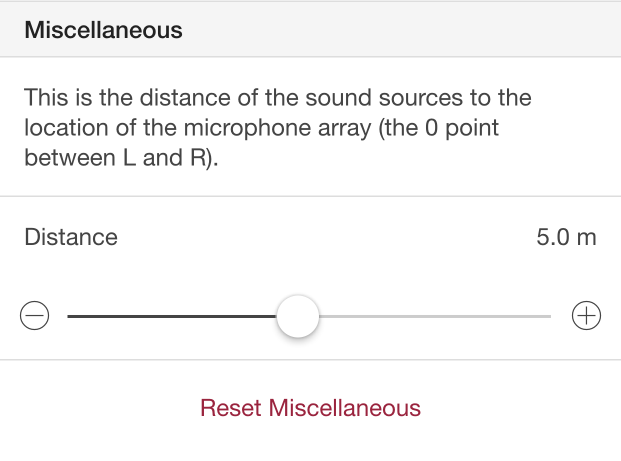 Sometimes it is required to apply an electronic level change or a delay of a channel in order to create a suitable stereo microphone array setup. This can be set here.

The view button in the bottom-right corner toggles the view between Localisation, Signal Differences, Coherency and Power Sum.

The function of the perceived phantom source direction vs. the angle of the input source in the recording stage is shown. The ordinate shows the phantom source direction on a scale between -100% (in the Left loudspeaker), C (in the Center resp. exactly between L and R) and +100% (in the Right loudspeaker). The abscissa shows the input source angle between -90° (left edge of the stage) and +90° (right edge of the stage).

The Legend tells whether the stereo image between L and R (Left-Right), L and C (Left-Center) or C and R (Center-Right) is shown and depicts the Recording angles:

The On-axis/Off-axis button in the bottom-right corner toggles the listening position. On the Off-axis listening position the perceived directional image is distorted due to the changed levels and time-of-arrivals of the loudspeaker signals. This function is useful to compare the robustness of a stereophonic microphone array with respect to listener movements and to estimate the size of the listening area produced by this array.

Only in 3-Channel mode: The LR/LCR button in the bottom-right corner toggles the view of the stereo pairs. You can view the stereo image between L/R (Left-Right) or the two stereo pairs L/C (Left-Center) and C/R (Center-Right). 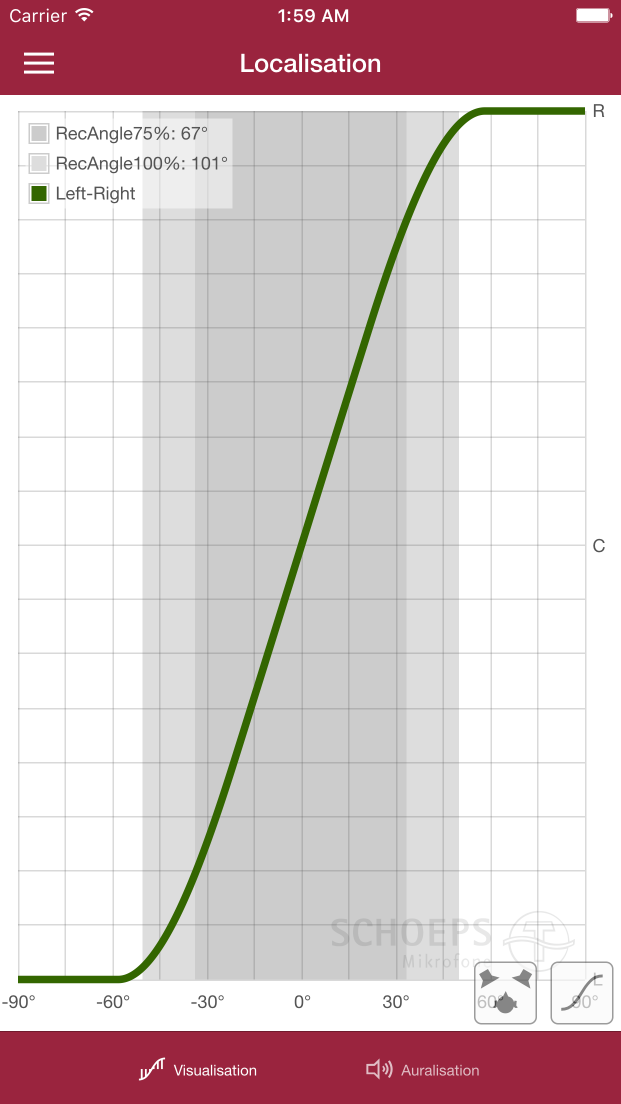 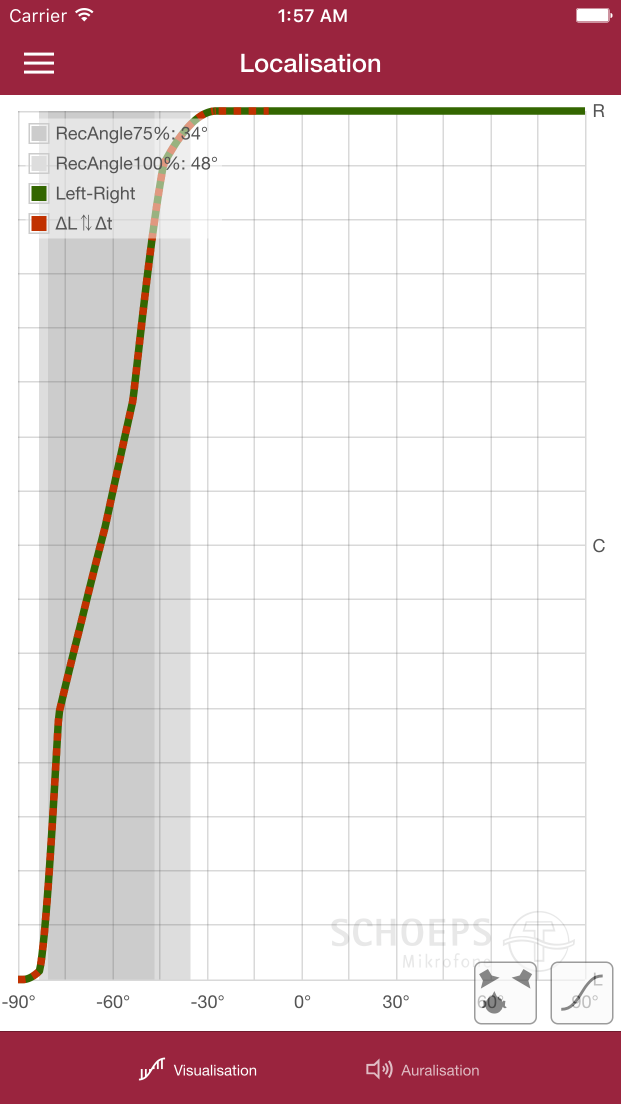 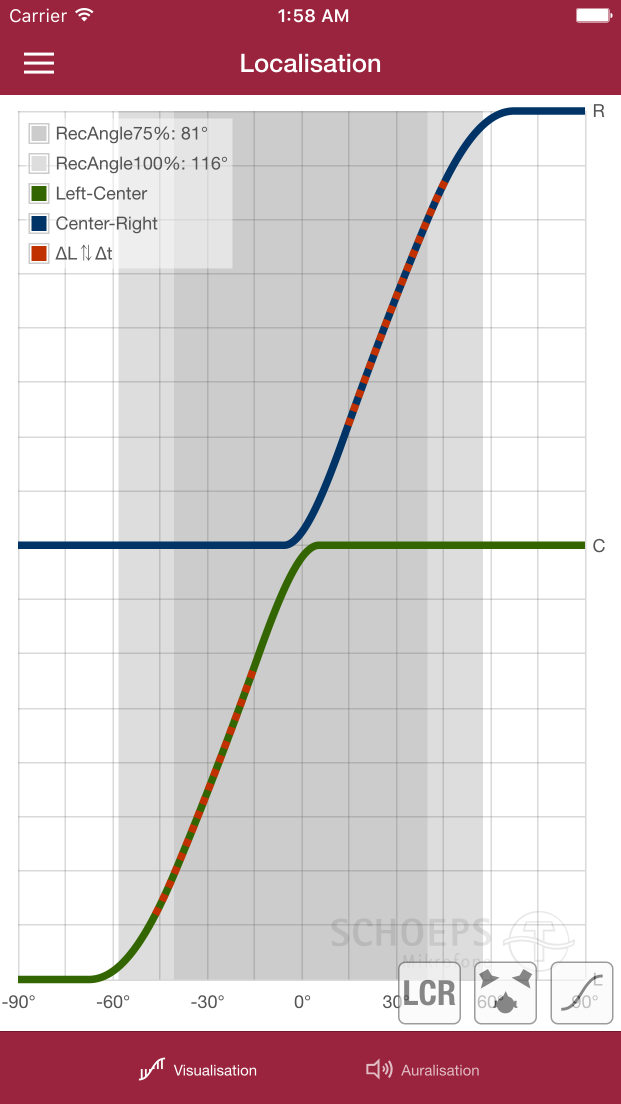 The level and time-of-arrival differences.

Also here, you can toggle the listening position with the button in the bottom-right corner. 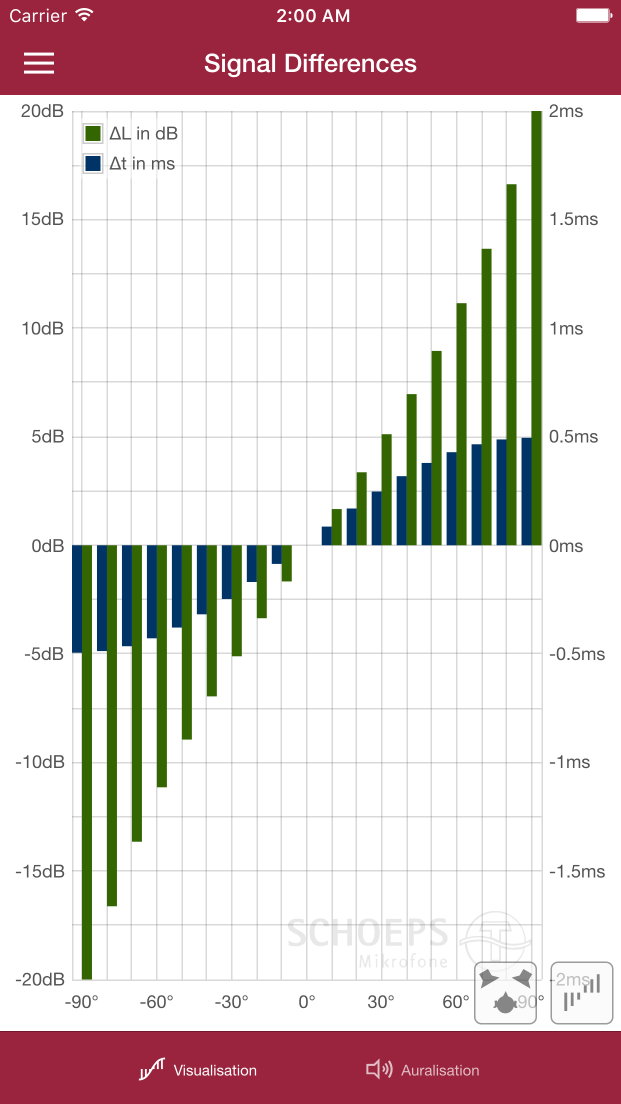 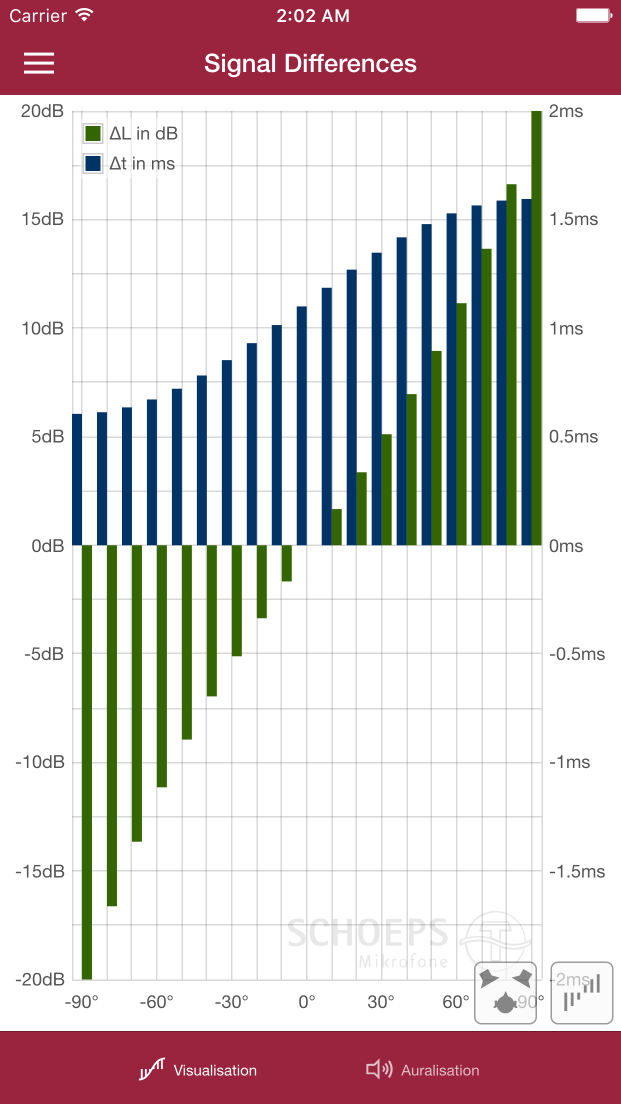 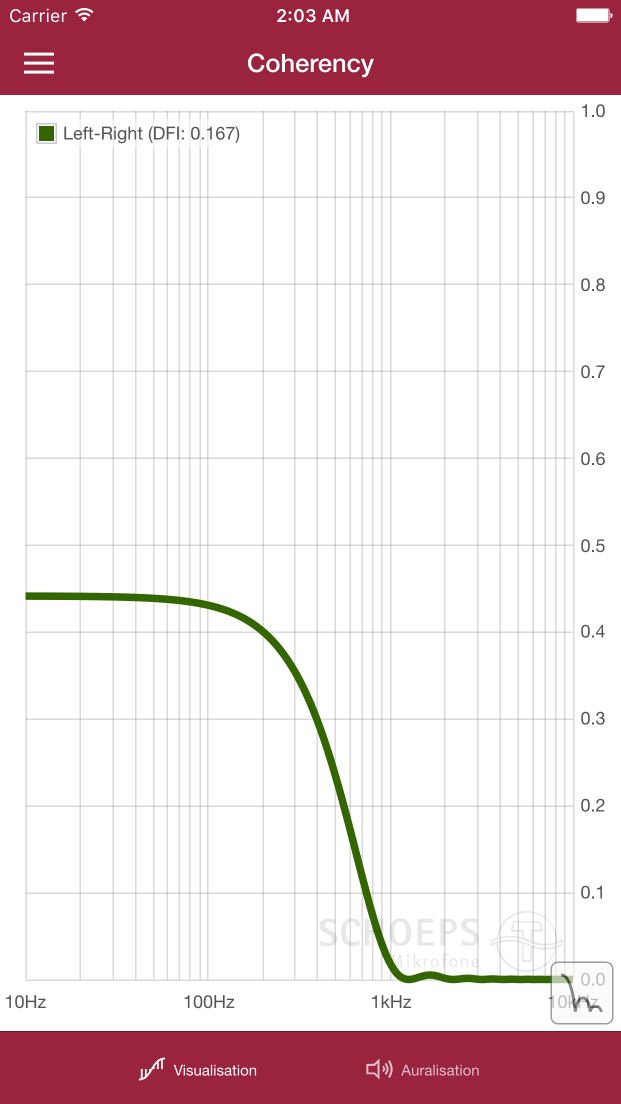 The power sum of all channels vs. the input source angle.

With that measure you can predict the loudness distribution of your stereophonic microphone array. 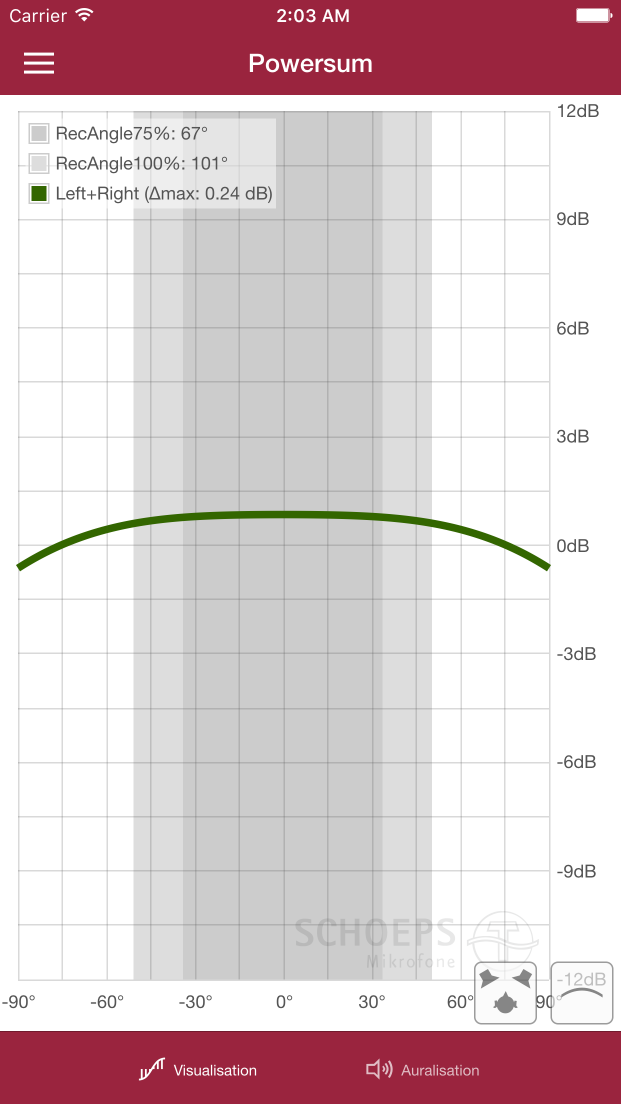 Listening to the directional and the spatial image predicted and simulated by the Image Asisstant v3 by convolution.

Set the desired input source angle and press PLAY to listen to the simulated sound image.

Both the correct directional pickup of the stereo array is simulated as well as the correct diffuse field coherency. Use this function e.g. to assess the differences in the spatial image between a narrow XY stereo pair an a wide A/B pair. 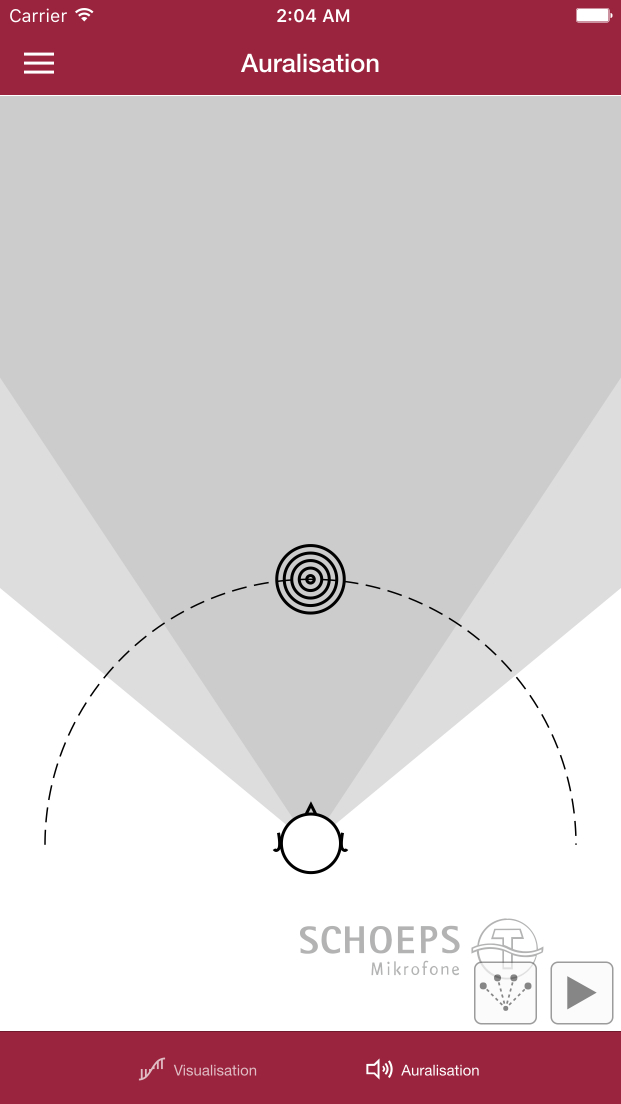